Xcode offers the possibility to run user defined code as part of the build process using the "Run Script Phase" in the "Build Phases" section. 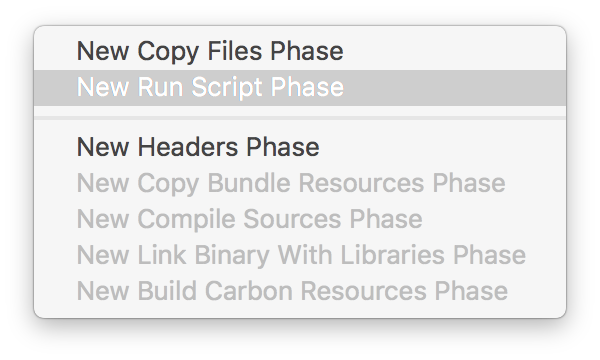 This is a very handy feature as it allows us to do things like:

As well as that, third party tools like Carthage and CocoaPods rely on build phases scripts for their Xcode integration.

Unfortunately the interface to manipulate these scripts that Xcode provides us is not the most usable 😞.

First of all, writing and editing a script in a text area this size is not ideal. Specially when, as of Xcode 8.2 beta 1 the text area cannot be resized. 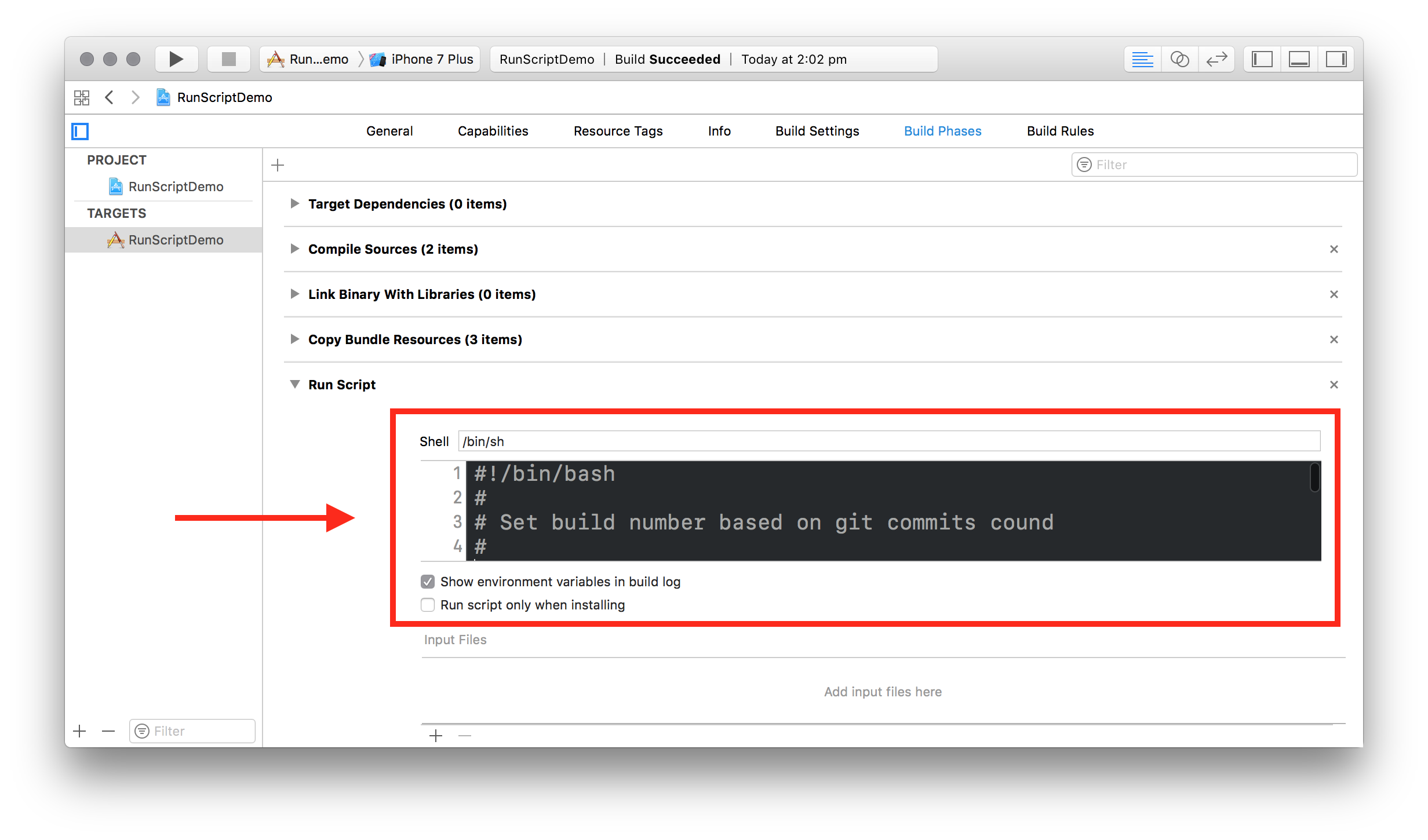 But even worse is the way the scripts are tracked in the project file: all in one line! How is anyone supposed to understand a diff like this?!

This makes it hard read the script during code reviews when it is added the first time as well as when changes are made to it.

Can you spot the difference?

For developers working in teams the readability and maintainability of the code is of top priority, and this is true for the code itself as well as the way its changes are tracked in the source control.

On top of that, if you've been using Xcode for a while you'll know how annoying it is to resolve conflicts on the project.pbxproj file, so any technique that can make changes on that file less likely is very valuable.

Let's see how we can make working and maintaining build phase scripts better with a few simple steps.

The single most effective action you can take to improve your build scripts is to extract them into their own files. If you bring anything home from this post I hope this is it. Extract your scripts.

The best way to do this is to create a folder in your project's root called "Build-Phases" and to create a file my-script.sh into it.

You can then make your script executable by changing its permission using this command in the terminal:

Finally you can replace the script content in the Xcode build phase editor with a command to execute your script: 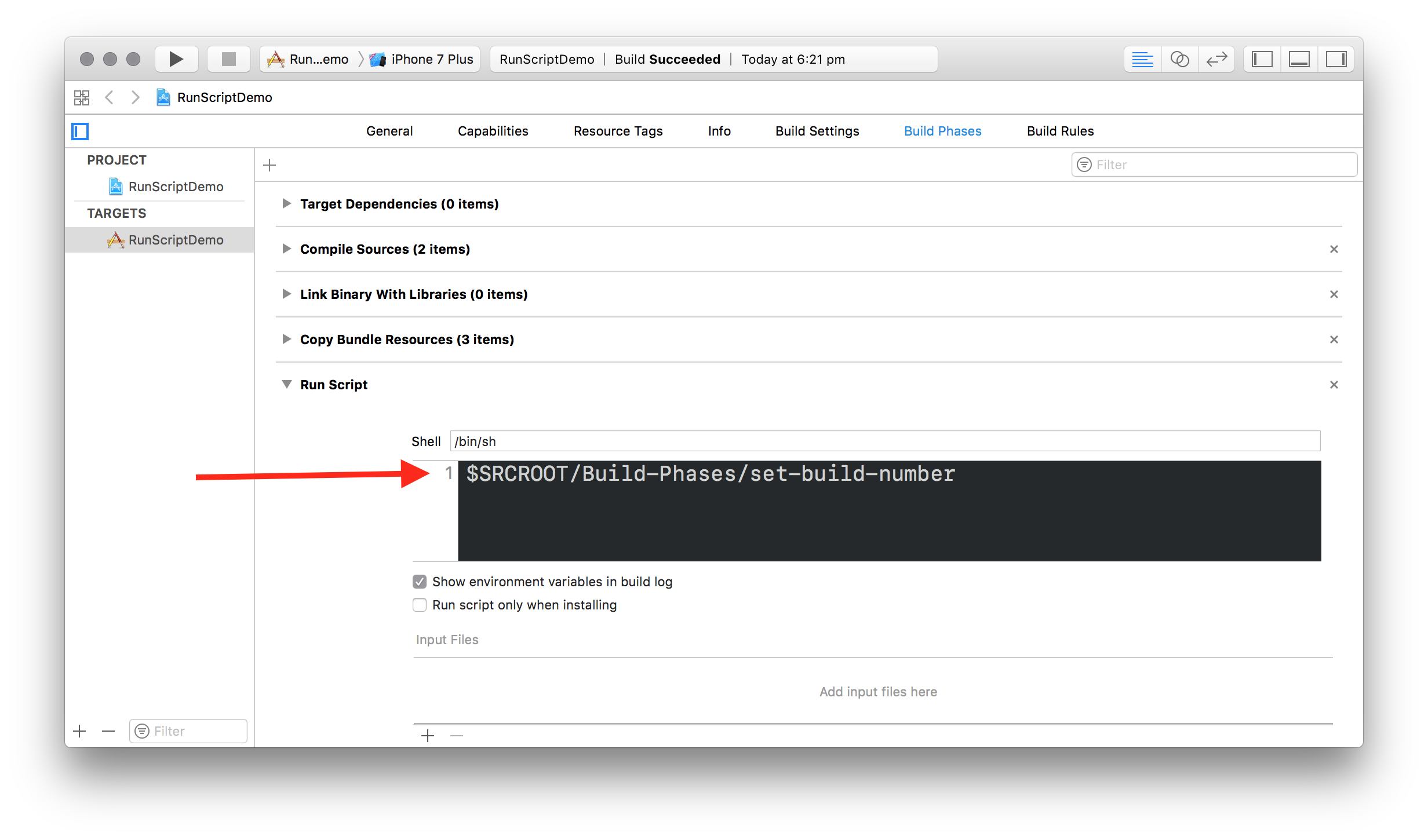 Now when you and your teammates will edit the file changing will be the script itself, not the project.pbxproj, making the diff way easier to understand:

Xcode will name every new run script phase as "Run Script", but that can be quite confusing when you have more than one. Double click on the "Run Script" header to reveal a text field you can use to rename your phase.

As the project grows you'll likely need to have more then one user defined build phase script. A way to keep this tidy and to keep avoiding changes to the project.pbxproj file is to group your many scripts under a "master script".

The idea is to have a single script invocation in Xcode, calling a script that will then take care of executing the single scripts.

This technique will help you grow your script, change their order, etc. in a tidy and understandable way.

The only gotcha is that all your scripts need to be able run in between any of the predefined build phases, in which case you should place them individually in the order they need to be.

You can make your scripts output compilation errors or warnings the same way Xcode does. I learnt this a while ago from this post.

This ability is quite handy, it allows you to communicate with the other developers using the script. You can use this for example to fail the build when required software is missing.

A common use of run script build phases is to integrate third party tools into the build process, but what happens when such tools are not present in the developer's machine? It's a good idea to fail the build and inform them that their setup is incomplete. This is how you can do it:

For example if you want to make sure new developers have SwiftLint installed, you can use this script:

Or if you feel that failing the build is too harsh, you can just throw a warning:

As with all software, run scripts phases don't usually come out right at the first try (at least not for me). Here's two debugging tips: 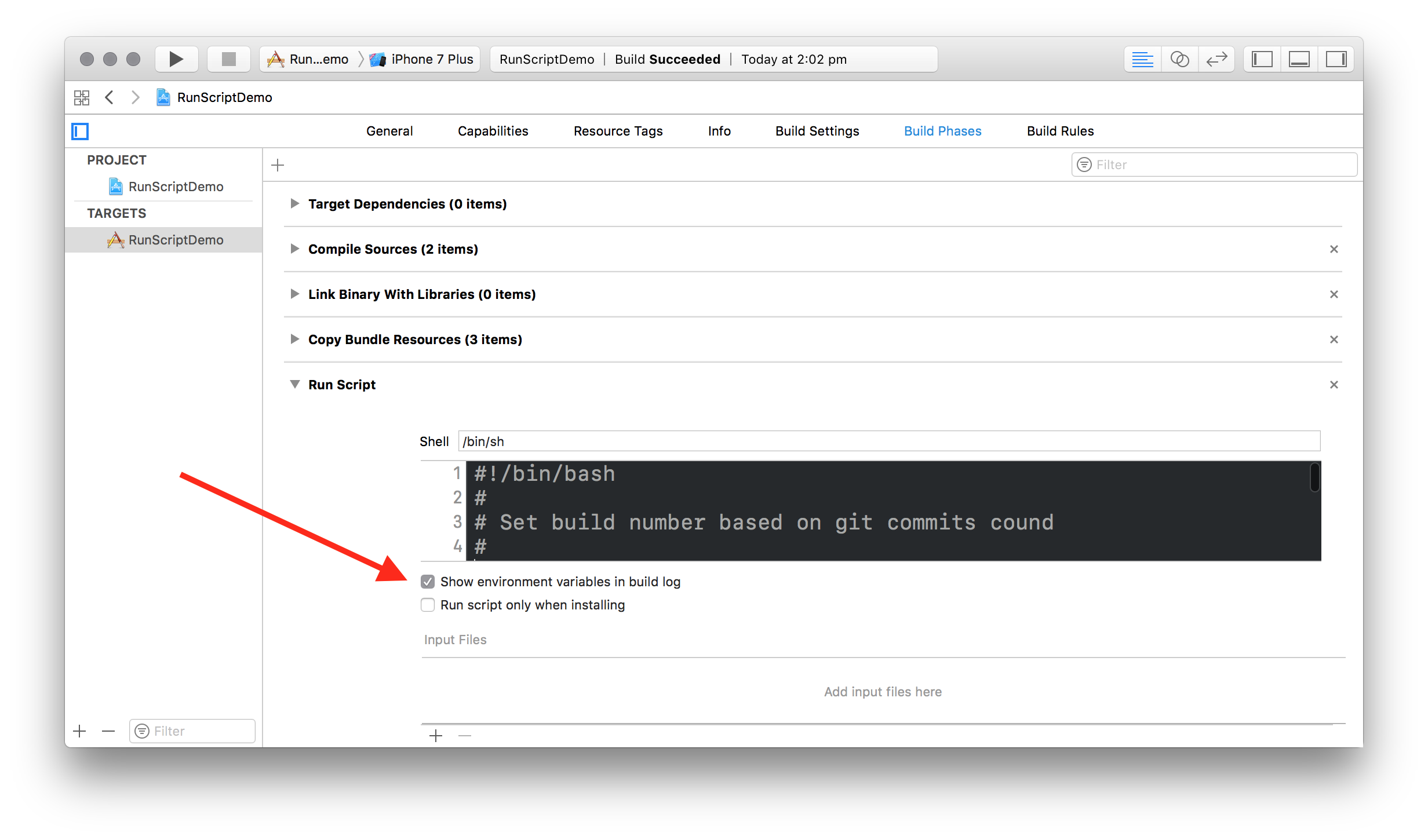 Add set -x at the start of the script to make the shell print all the commands it executes. This is very helpful to find out at which point of the script failures occur.

And remember that you can use echo "error: message" and echo "warning: message" to log extra information to help you debug your issues in the script.

Run Script Build Phases are very useful and can help you automate a number of tasks and improve the overall quality of your codebase.

I hope this post provided you with useful tips on how to write better scripts, if you have questions, have found an error, or need help setting up your run scripts feel free to leave a comment below, or get in touch on Twitter @mokagio.