How to use social media productively

A simple fact of life is that there are only 24 hours in a day. Whatever your definition of being productive is, a crucial part of achieving it is spending those 24 hours as best as you can.

The average internet user spends more than 2 hours on social media a day.1 I'd wager most of these people could spend that time better.

But I'm not here to wage war against social media, preaching you should delete all your accounts today. On the contrary, if you think one or more platform is useful to you, you should keep using it. What I'd like to focus on is how to use them.

I'll use Twitter as a personal example. I have long stopped using Facebook and Instagram, but I look at Twitter almost daily. It's one of my sources of tech news, a way for me to share my work, and a place keep in touch with friends from the tech community.

On the other hand, my browsing of Twitter can quickly degenerate into mindless scrolling looking for something to click, and before I know it I've wasted half an hour.

To my defense, it's not all my fault. It's not just a matter of will power. Twitter and all the other social media and infotainment platforms have spent years tailoring their webpages and apps to become engaging and addictive. These technologies exploit shortcomings of our brains to make us stay with them longer and return often, so we can see the ads that generate their revenue. This post by design ethicist Tristan Harris is an excellent introduction to the techniques they use.

How can we use social media, infotainment sites, streaming platforms, and all the other inventions of the internet age productively? How can we get what we need out of them without being sucked in?

In business lingo, a standard operating procedure is a "set of step-by-step instructions compiled by an organization to help workers carry out complex routine operations"2.

Applied to social media and other entertainment platforms, these are rules that describe when and how to use those technologies.

By clearly defining the way we interact with any given site or app we can counterbalance how tech giants have optimized their products to make us addicted.

With these rules we can be more intentional in our usage of social media and the likes, taking control back into our own hands.

Here's a concrete example. These are my operating procedures for Twitter.

I mostly browse Twitter through the TweetDeck desktop app. I like it because it allows you to show lists, notifications, etc. one next to the other, without ever having to visit the homepage.* 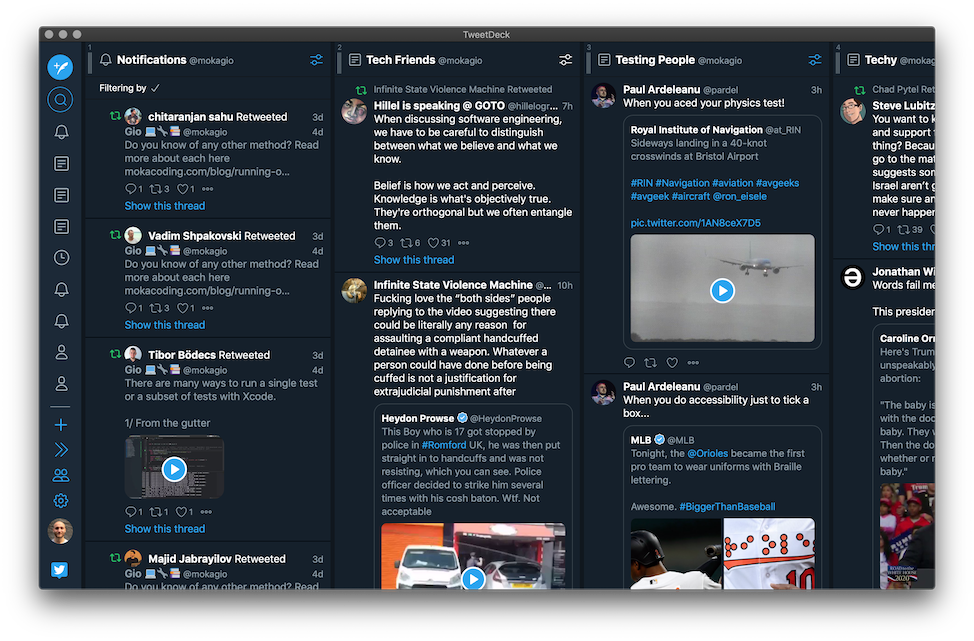 On the web, I use the refined Twitter plugin to remove a lot of the noise from the UI.

Thanks to these simple rules and tweaks I have lost the urge, and I rarely end up scrolling mindlessly, without having to give up what I find valuable in the platform.

How to develop your own operating procedures

The goal of a standard operating procedure is to optimize your use of a given technology.

You should develop your own procedures to get more value out of a platform and at the same time experience less of the negative aspects of it.

Take a look at how you use the technology and think if there's a better way to get value out of it. You could use filters to only show content you really like, or bookmark the pages you want to keep up with to make them easier to reach while at the same time cutting off the distractions of the homepage. To stay up to date with the news, you could bypass shallow infotainment news aggregators and subscribe to a few highly curated newsletters instead.

Also, think about what you don't like in a technology or in how you use it, is there a way to minimize that? In Digital Minimalism the author shares how one of his readers only watches Netflix with their partner, to avoid isolating themselves and binge watching. A friend of mine is into videogames but is also wary of how they tend to suck you in. He schedules a few hours of uninterrupted play a week, during which he's fully immersed in the game. This is enough to let him enjoy himself, and knowing he hasn't compromised his productivity gives him great satisfaction. Moreover, he has the next scheduled session to look forward to, which makes it even more enjoyable.

A useful way to optimize your technology interactions is to trigger them at a particular time of the day or to time-box them.

By scheduling the times in which you interact with social media you can add an extra layer of control and intentionality. A big danger of these technologies is that they need you to constantly use them during the day to make money. Having predetermined times to visit them is a way to resist the urge to have a quick look.

For me, checking Twitter only at prefixed times was a shift from a reactive approach to a proactive one. Instead of "I feel slightly bored, let me mindlessly scroll," I now think "It's time to catch up with my feed." Not only you'll make it harder to become addicted, but you'll also enjoy the technology more, because you'll be intentionally using with it, rather than responding to a boredom stimulus.

In the same way, time-boxing your interaction is a way to ensure these technologies don't take over your schedule. Admittedly, time-boxing requires will power. It's easy to say "just another few minutes," and quickly lose track of time.

A way to make time-boxing easier is to automate it. Have a look at these tools to set time limits for interactions with apps and websites.

The freedom of constraints

A common concern with this scheduling approach is that it'll end up sucking away all the spontaneity from life.

It turns out to be quite the opposite. Having allotted time slots for social media and other tasks frees up more time in my day for real spontaneous activities, like going for a walk, write to a friend, or have a tickle wrestle with my son.

The more I structure my days around routines and rituals, the more I find myself relaxed, and in control. It's in the days in which my plans are disrupted that I end up being flustered and unproductive.

If at any point during the day I feel like visiting Twitter, knowing I have already scheduled a time for it later settles my mind, avoiding what could have been a time consuming and focus ruining distraction.

As software developers, it's easy to feel the urge to try out every new app and tool. It often feels like time well spent researching what other people are doing in the industry. The shiny new object syndrome applies as well to social media, apps, and infotainment websites as it does to frameworks and tools.

The Digital Minimalism philosophy encourages us to take a thoughtful approach to the use we make of technologies in our lives.

Critically assess every platform you use, and keep only the ones that are genuinely useful and in line with what you value. For those, ideally few, technologies that make the cut, take an extra step and make sure you optimize the way you use them so that they are value generating tools, not time sucking addictions.

For me, Twitter is a technology with the potential to generate value. But for this potential to materialize, I need to be the one in charge of the interaction, not the other way around. Defining an operating procedure is a way to makes sure Twitter remains a tool for me, and I don't become a tool for Twitter.

What technologies do you find valuables? Do you have operating procedures to interact with them? I'd love to hear from you, leave a comment below or get in touch on Twitter @mokagio.

"more than 2 hours on social media a day." Data from the 2019 GlobalWebIndex report, via Digital Information World.

TweetDeck. The cynical in me wouldn't be surprised if Twitter soon removed the lists feature and sunset TweetDeck to force users to interact with their algorithmic timeline. Only time will tell.