How to remove duplication from Swift tests with helper functions

As your codebase grows so will your test suite. Production code is often refactored to stay simple to work with. The same care should be applied to the test code.

Your unit test suite should be kept as tidy as your production code. Let's see how to remove duplication from tests using helper functions.

Imagine you have a logging component and you want to ensure it logs the expected message for the given inputs to the provided storage layer.

This code is also available on GitHub.

Now, let's say in this system it's important to ensure the logger behaves as expected with inputs of type Pasta, Gelato, and Cappuccino.

One way to do it is to duplicate the test for Pizza for each of those inputs.

While there's nothing bad with a bit of duplication in the case of a mechanical behaviour like this one you could do worst than spending a bit of time to remove those duplicated test code.

This is worth doing. You'll end up with code that is easier to read and change in the future. All with little time investment upfront. Bargain!

Have a look at those three tests, you'll see they all look the same. The only differences are the input of the system under test and its expected behaviour.

You can extract the test in a function of those parameters:

You can then write a single test in which to call the encapsulated expectation for each of the inputs you care about.

Nice. There's a little problem though. If the test fails Xcode will show the failure in the expectation function body, not at the call site. 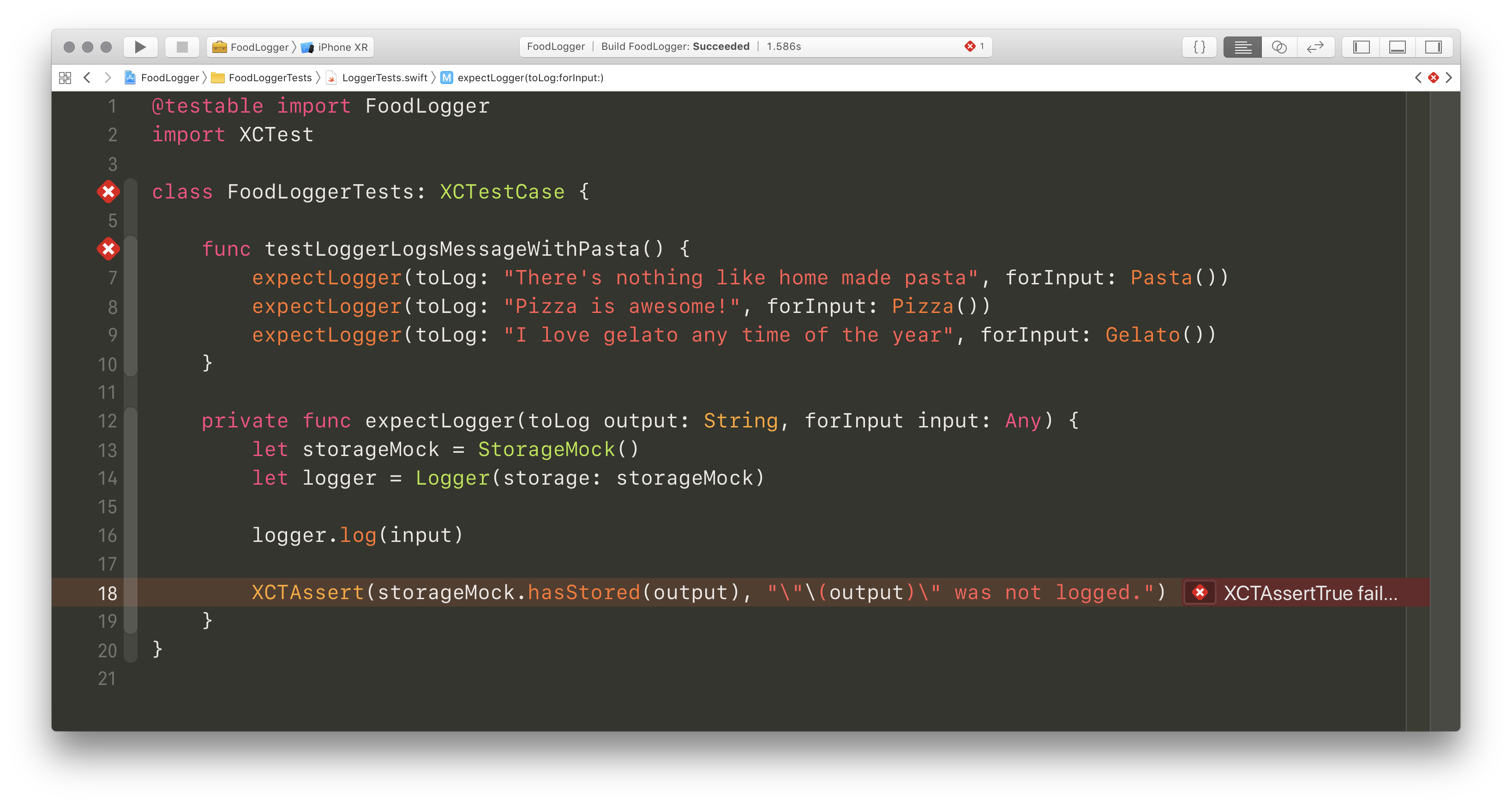 Even worse if you have more than one failure, it requires you to click on the message to expand it an learn which tests failed. 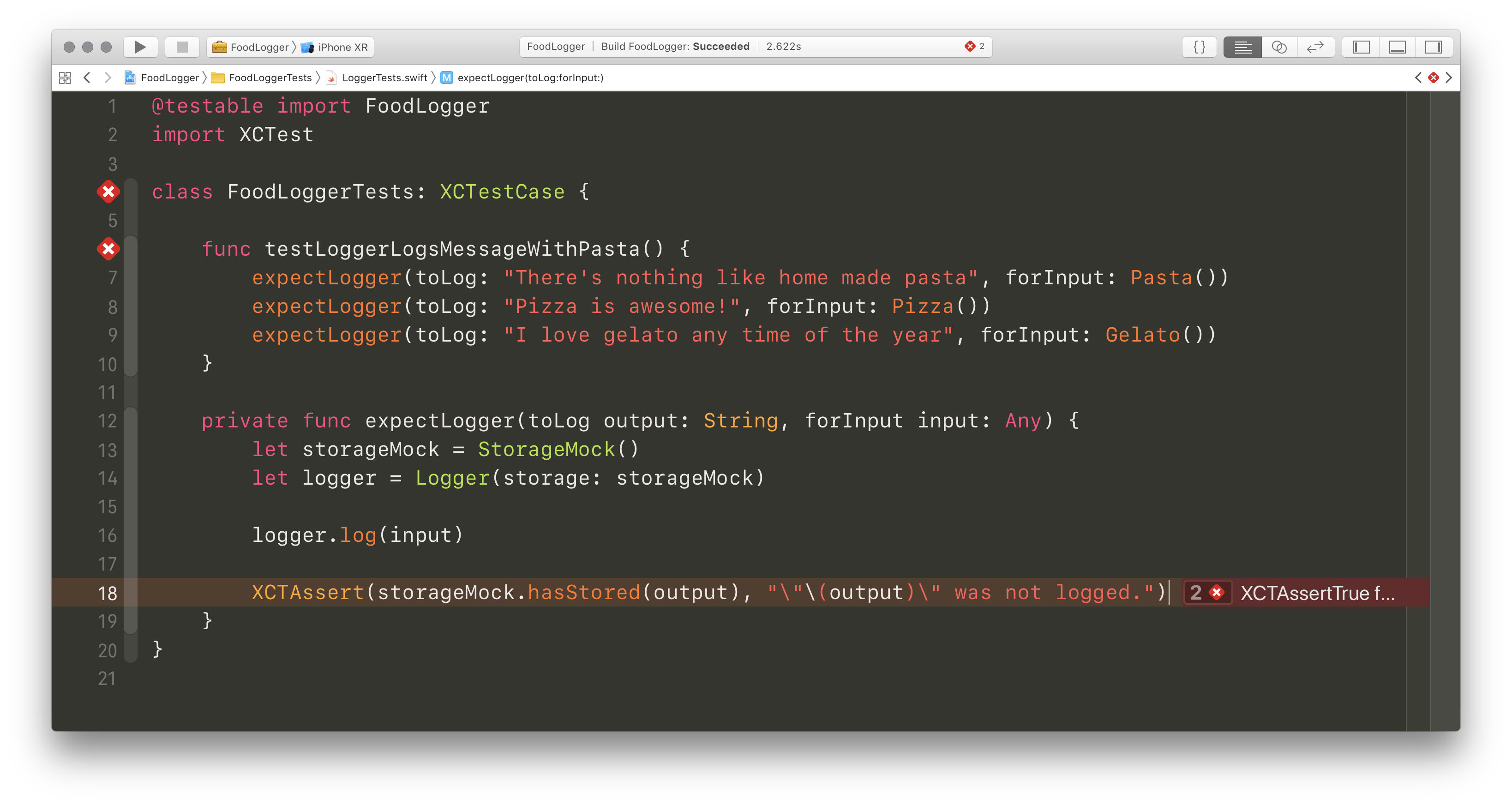 When writing unit tests the easier you make failures to be discovered the better off you'll be.

Accurate failures with #file and #line

Not having duplicated code is great, but not knowing which of the expectLogger(toLog:, forInput:) calls failed makes understanding -and eventually fixing- the test failures harder.

Wouldn't it be great if the failures were reported at the call site of the test helper method?

The documentation for the XCTAsser- family of methods shows how to do it. Xcode's code completion when calling an XCTAssert- method shows this:

There are other two input parameters the functions can accept. They don't come up in the autocompletion view because they have a default value.

file The file in which failure occurred. Defaults to the file name of the test case in which this function was called.

Armed with this knowledge you can pass the call site details to the test helper, so it can relay that information when calling an XCTAssert- or XCTFail.

Now the test failures are reported where expectLogger(toLog:, forInput:) is called. This makes it clearer where to start looking for the issue. 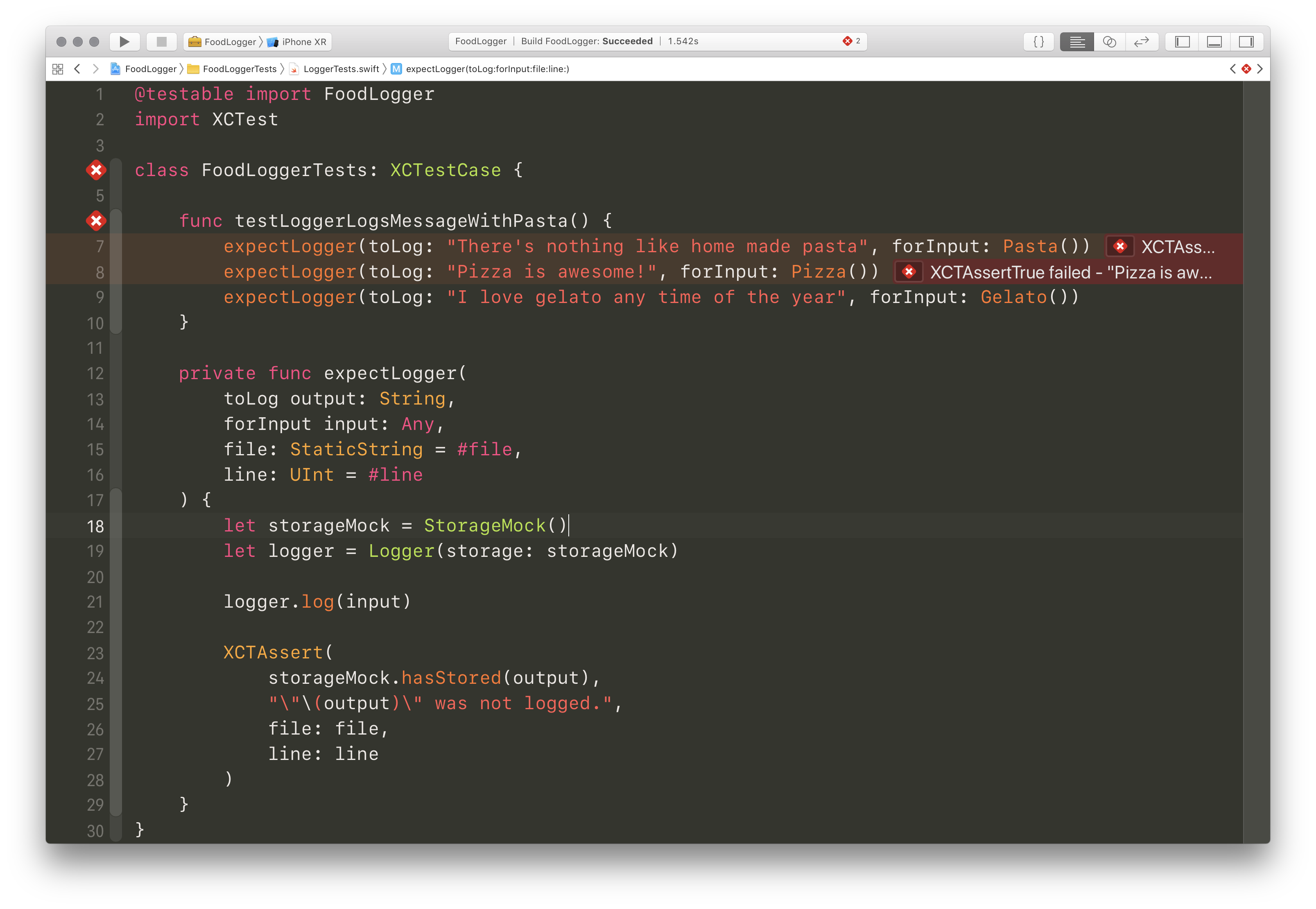 As a developer who cares about your craft you'll be already spending a lot of time refactoring your production code to make it as pleasant and simple as possible to work with. You ought to do the same with your test suite.

When extracting code calling an XCTest assertion method you want failures to be reported at the call site, not in the helper function. This can be done by passing the #file and #line values through.

This technique will help keeping the tests tidy and avoid extra work when adding new ones.

On the other hand, tests are a window on the ergonomics of your software. If something is hard to test it's likely its design can be improved.

You should always be paying attention to how your tests feel to write and read. When they become painful or require extra work ask yourself whether the design can be improved.

In this post we look at how to rewrite Logger in a way to make testing it -and as a direct effect using and maintaining it- easier.

What do you think of test helpers? Is there anywhere in your test suite where you could use them? Or maybe you are already using them and want to share how they're working out for you. Leave a comment below or get in touch on Twitter, I'd love to hear from you.